Is an AI Relationship Real? 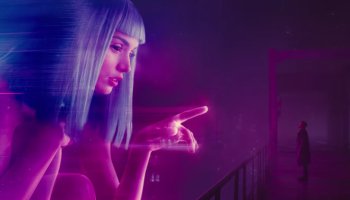 This week I have several questions about the future, each inspired by Blade Runner 2049, which I saw on Saturday (very minor spoilers to follow). It’s an odd case where I liked the ideas presented by the movie more than the movie itself–it’s fine, but just not something I fell in love with.

I did, however, fall for the AI hologram “girlfriend” of Ryan Gosling’s character. Joi’s scenes stole the show–I was riveted by the ideas presented around her existence, and I could have watched an entire movie just about her (in a way, I have, thanks to the movie Her).

I was particularly intrigued by Joi’s hologram because of how it allowed her to have a visual presence. It’s hard to describe, but think about how much easier it is to talk to someone face to face rather than on the phone. The ability to look at someone or share the same space as someone makes a huge difference in how you communicate and relate to them.

The weirdest part to me is that I totally understand why Gosling’s character values having Joi in his life, even though she’s not corporeal. She’s there for him as an intellectual and emotional companion. She’s capable of independent thought–she’s fully sentient. And while she can’t be physically sexual, there’s plenty of sexuality that doesn’t require touch.

I think the only disturbing part to me is that Joi doesn’t have a choice to be in the relationship. That’s what she’s designed to do. So the only way I’d be okay with a Joi of my own is if she was coded with free will.

Even if you haven’t seen the movie, do you think it’s possible to have a human-level relationship with an AI entity?

This entry was posted on Sunday, October 8th, 2017 at 10:54 pm and is filed under Uncategorized and tagged with relationships. You can follow any responses to this entry through the RSS 2.0 feed.

11 Responses to “Is an AI Relationship Real?”