Would You Stay at Hogwarts Overnight? 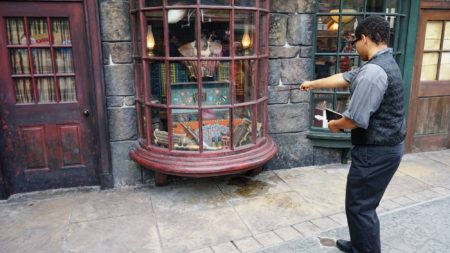 I’ve never been to the Wizarding World of Harry Potter, but I’ve been fascinated by the idea of it for years. I love the idea of getting paired with a magic wand, and who wouldn’t want to drink fresh butter beer?

I was all the more intrigued when a friend informed me recently that you can now get fully interactive wands at the Wizarding World. At certain places in the park, if you wave the wand the correct way, something “magical” will happen (a knight will move, a flower will bloom, etc–see video here). Sure, it’s an illusion, but where else do you have the opportunity to get actual results from a magic wand?

So I started to wonder, what would it take to actually get me to go to the Wizarding World? It’s one thing to fancy the idea, but quite another to actually make the trip and show up as a grown man without kids at a Harry Potter-themed amusement park. (Perhaps I can wait until my niece and nephew are old enough.)

Here’s what I decided: I want to stay in a hotel that looks, feels, and acts like Hogwarts.

That’s right. Both the outside and the inside of the hotel would look and feel exactly like Hogwarts. When you arrive, you would be sorted into your house, and that’s where you’d stay. You’d eat meals in that giant dining room. You could explore in your free time or play a game of Quidditch. And so on.

It’s almost so obvious that I wonder if there’s a reason Universal hasn’t already done it. They certainly have the set designers to make it look and feel like Hogwarts (in fact, they’ve already built a version of it for the theme park–it’s just not a hotel). They’ve had the time to build it. I can’t imagine it wouldn’t be worth the investment–wouldn’t it be the first choice of anyone going to the Wizarding World? What am I missing?

And, most important, would you stay at the Hogwarts Hotel?

This entry was posted on Tuesday, January 30th, 2018 at 8:37 pm and is filed under books and tagged with books. You can follow any responses to this entry through the RSS 2.0 feed.

7 Responses to “Would You Stay at Hogwarts Overnight?”