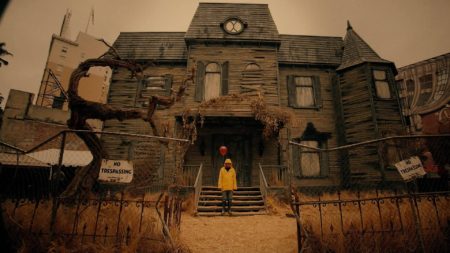 This is a weird topic to write about, as I don’t think I’ve ever been in a haunted house. But I had an idea for one after listening to Patton Oswalt’s standup on Netflix, and I’m curious how people who like haunted houses would respond to this.

So, say you show up to a haunted house, and when you arrive you have to fill out a short liability form. You don’t think much of it–the haunted house would make it look as boilerplate as possible.

In reality, though, while you’re walking through the terrors, people behind the scenes use the information you provided on the form to learn about you on social media. They start feeding that information to the costumed “monsters” in the house.

As a result, instead of the spooky witch simply cackling as she stirs her cauldron, she locks eyes with you and tells you that the blue color of the elixir comes from the shirt you wore yesterday. Or when you see a mummified dog in the next room, the mummy informs you that its name is the same as your favorite pet.

The idea partial comes from an Arcade Fire music video from a while ago where you entered the address where you grew up at the beginning of the video, and the footage in the video was pulled from Google Maps. It created a powerful sense of nostalgia–quite a different emotion than fear, but in the same realm.

Perhaps it’s simply to creepy and invasive, but people sign up for haunted houses to be scared, right? How do you think you would respond?

This entry was posted on Wednesday, May 9th, 2018 at 10:04 pm and is filed under ideas. You can follow any responses to this entry through the RSS 2.0 feed.