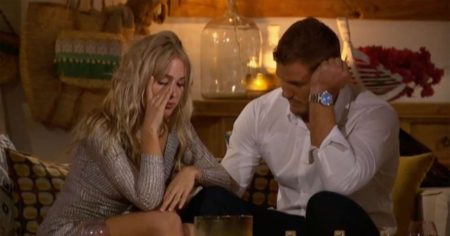 A few weeks ago, I watched and commented on an episode of The Bachelor. I’ve continued to tune since then, fast forwarding through decent chunks of each 2-hour episode, but still getting wrapped up in the story.

Last night’s episode packed an emotional punch, though I have some thoughts to share on a conversation that happened in the middle of the show between Cassie and her father. I had appreciated her father’s firm stance in the previous episode, but he said two things in this episode that I strongly disagree with. I think his intentions were good–he’s looking after his daughter–but in my opinion he painted an unrealistic picture of love.

I just think that’s an absurd qualifier for whether or not you should date someone or even fall in love with someone. Having doubts early in a relationship is completely normal. That’s what dating is for. You learn about the person and you learn about yourself. In fact, I’d be a lot more concerned if she had no doubts at all–if you’re completely blind to them, are you really being honest with yourself?

Now, you may be thinking that this is different. This is the Bachelor, which traditional ends with a proposal. So it’s not just dating–it’s a lifelong commitment, right?

Well, Cassie’s father said that several times, repeatedly emphasizing that this was the rest of her life. This really bothered me too, because an engagement is not the same as marriage. My understanding of The Bachelor is that the engagement is essentially a made-for-TV moment, but the real relationship begins after that. The two people date for real (instead of dating dozens of people at once), and often it doesn’t work out.

I’m not a father, but if I had a daughter on this show, I’d probably be concerned too. At least, though, I hope I wouldn’t paint such a completely unrealistic portrait of love and dating to her. The words of a parent dig deep, and there’s a lot of responsibility that accompanies them.

This entry was posted on Tuesday, March 5th, 2019 at 10:04 pm and is filed under relationships and tagged with relationships. You can follow any responses to this entry through the RSS 2.0 feed.

2 Responses to “Love, Doubt, and Forever (The Bachelor Saga Continues)”