How Would You Respond to the Oscar Mishap? 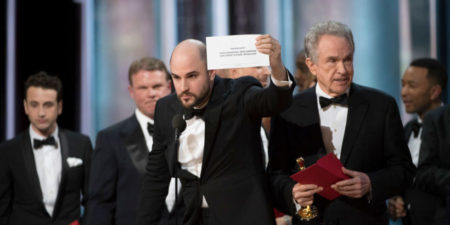 I wasn’t watching the Academy Awards last night when it happened, but it was all over social media so quickly that it felt live.

You probably know the story by now: Warren Beatty was given the wrong envelope, and Faye Dunaway correctly read the movie on the card in that envelope: La La Land wins best picture. Then the mistake is realized that Moonlight is given the award.

Man, that’s rough. To have the elation that you’ve won only to learn that it’s a mistake is a cruel twist of fate. The people on that stage spent so much time, energy, creativity, and money making a film that they loved. I can’t imagine the tumult of emotions they must have experienced up there.

I’ve watched the clip a dozen times since then, and the thing that really sticks with me is how differently two of the La La Land producers responded. The first producer to be informed of the mistake said, “We lost, by the way, but, you know…”

Another producer–Jordan Horowitz–quickly took the mic and conveyed the message in a different way. “I’m sorry, there’s been a mistake. Moonlight,  you guys won best picture.”

It was a reminder to me that even in the face of shock and failure, you have the choice to be inward-facing or outward-facing. The first producer focused (understandably so) on his loss. Horowitz, however, focused on Moonlight’s win. I like that. I’m not sure I would have the grace or poise to respond that way, but I like it.

What was your reaction to this memorable moment at the Academy Awards?

This entry was posted on Tuesday, February 28th, 2017 at 12:10 am and is filed under movies and tagged with movies. You can follow any responses to this entry through the RSS 2.0 feed.

5 Responses to “How Would You Respond to the Oscar Mishap?”