I was moved to tears today by a reality show.

For this season of Survivor, I’ve been hosting viewing parties every 2 weeks instead of every week, which works better for everyone’s schedules. We watch both episodes back to back.

I had heard rumors about last week’s episode, but they came nowhere close to conveying the actual emotional punch of the last 20 minutes. Even if you’ve never seen Survivor, I would highly recommend watching this episode (or just the tribal council part of it). 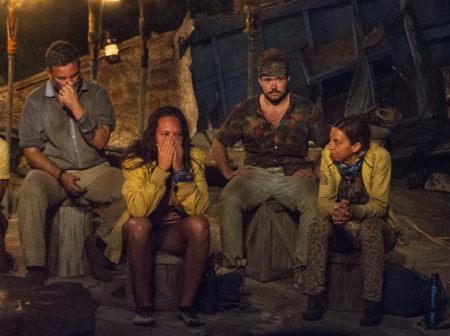 At tribal council, as an effort to save himself from being voted out by casting suspicion on someone else, a contestant turned to a teammate (Zeke) and said, “Why haven’t you told anyone here you’re transgender?”

There was a moment of shock and silence. People couldn’t believe what he had just said. But what happened next was nothing short of beautiful.

As the outed contestant sat in silence, one by one (and sometimes overlapping), his teammates expressed their sadness and anger over the monumental violation of trust. Some broke into tears. Others yelled. Some were calmly anger.

Even the host, Jeff Probst, weighed in, making sure the contestant knew the impetus of what he just did.

I’ll pause there for a moment, because some personal context may be important: I have very little experience with people coming out in any way (homosexual, trans, etc). I think I know how big of a deal it is, but it’s almost from a distance–like, I’ve never been a part of a truly raw moment of someone bearing themselves to me in that way (at least not in my poor memory’s recollection).

In the way the people on Survivor responded to the transgression, I now know. It was a painful, hurtful moment, and as low as that one person went, it was incredibly moving how high the others responded.

These were people from all walks of life: A California surfer dude. A older man. A midwestern cop. A small-town girl from Wisconsin. A wacky older woman. Not a single one of them responded the way the contestant wanted them to (his intention was to make them distrust Zeke from hiding this side of himself from them). Instead, they universally supported Zeke and were deeply affected in different ways.

It’s hard to describe, so again, I recommend watching the tribal council if you have the chance. To me it’s the human spirit at its best, showing true care and compassion even in the midst of $1 million battle. I feel more human for having seen it, and it’s incredibly rare that a TV show would have that kind of impact on me.

Oh, and it’s worth mentioning that after sitting in stunned silence for several minutes, Zeke finally responded with awe-inspiring composure. He was disappointed but not hateful, and I think it’s from the way he talked about it that Survivor even decided to air that part of the episode.

When is the last time you were moved by the human spirit?

This entry was posted on Thursday, April 20th, 2017 at 10:46 pm and is filed under Survivor, television and tagged with television. You can follow any responses to this entry through the RSS 2.0 feed.