The Day I Went Feral 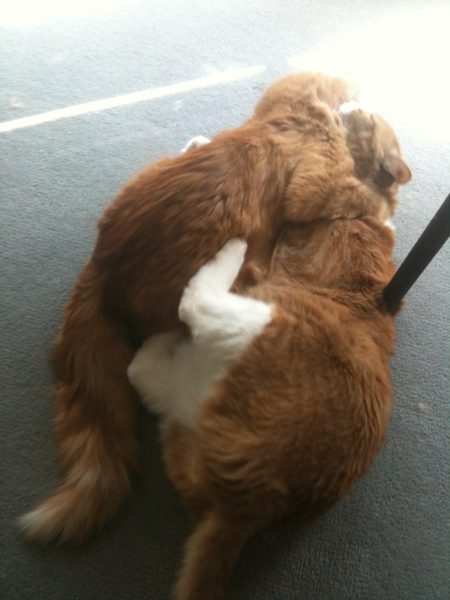 When I was picking up my older cat, Biddy, from the vet the other day after his glucose curve, I stumbled through the following question.

“So, uh, Biddy frequently poops on my bed when he gets frustrated by my other cat, Walter. Is there anything I can do to, well, convince him not to do that?”

The vet nodded sagely. She’s heard it all, and she had a recommendation: Comfort Zone Feliway Multicat Diffuser.

The product description reads, “Mother cats naturally emit a pheromone message to kittens after birth to help them feel safe and secure and maintain a harmonious bond between them. The Comfort Zone Multicat Diffuser dispenses and odorless vapor mimicking this pheromone and is clinically proven to help reduce tension and conflicts between cats in multi-cat homes.”

I received my diffuser earlier today, plugged it in…and after about 30 minutes, I started to feel weird. So I Googled, “Cat pheromones affect humans?”

As it turns out, pheromones are species-specific. So whatever I was feeling was purely psychological.

Either that or within a few days I will be completely feral, rubbing my scent on everything in the house, knocking things off tables, curling up in boxes.

The good news is, so far Biddy hasn’t pooped on the bed. (Actually, after typing that sentence, I got up to check to see if it’s still true. It is!) And Biddy and Walter haven’t gotten in a fight today either. So maybe it’s helping?

Have you ever used one of these devices for your pets?

This entry was posted on Thursday, July 6th, 2017 at 10:24 pm and is filed under kitten and tagged with cats. You can follow any responses to this entry through the RSS 2.0 feed.

5 Responses to “The Day I Went Feral”