Do You Play HQ Trivia? 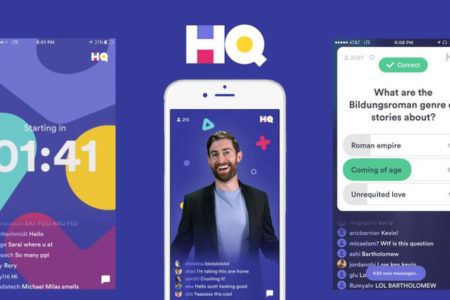 I’m not sure if this is a St. Louis thing, a midwestern thing, an American thing, or a universal thing, but trivia nights are quite common here. I bet there’s one almost every night at a bar, and a number of fundraising events are structured around them.

I, however, generally avoid trivia nights. I love games, but I don’t know a lot of random facts, and I end up feeling useless and a little dumb at trivia nights. Nothing against them–they’re just not for me.

So I’ve been surprised by how much I’ve enjoyed playing HQ Trivia. It’s an app that features a twice-daily live trivia competition for hundreds of thousands–sometimes millions–of live contestants.

Here’s how it works: If you have the app (which is free), you’ll get an alert right before 2:00 pm CST and 8:00 pm CST every day to join the latest competition. A few minutes later, the host starts asking trivia questions. You pick from 3 possible answers. If you’re correct, you stay in the competition. If you’re incorrect, you’re out of that particular game.

There are typically 12 total questions, and each game is played for a certain amount of money (lately it’s been $2500). If you get all 12 questions right, you split the prize pool with all other perfect contestants.

The questions start out super easy (like, “What sound does a cow make?”), and they rapidly become more difficult and eclectic. The progression works really well, because the app lets you feel really smart for a few questions, and then if you get any questions right after that, you feel like a genius. The most I’ve gotten right so far are 8 questions in a row–usually I lose around the 4th or 5th question.

There’s something special about the app being “live.” I don’t think it would work otherwise, particularly for the prize pool, but I really feel like I’m competing against thousands of other people in real time. If I could sign on any time to answer the questions, it wouldn’t be nearly as entertaining.

Also, the money is a nice carrot on a stick. It’s a nice way to entice people to try out the app. After it’s divided up, though, it’s usually only $10 or so per person (though I’ve seen one prize pool go up to $130 per winner). I think winning is much more about pride than money.

Have you used HQ Trivia? If so, have you won?

This entry was posted on Sunday, January 28th, 2018 at 9:38 pm and is filed under Uncategorized and tagged with technology. You can follow any responses to this entry through the RSS 2.0 feed.

8 Responses to “Do You Play HQ Trivia?”