Have You Seen Oh, Hello? 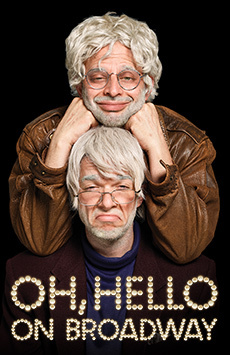 One of the biggest entertainment surprises for me in a long time is how much I enjoyed watching Oh, Hello. I laughed harder and more often than I have at any TV show or movie this year.

Oh, Hello was a 2-man Broadway show spanning from 2016-2017 featuring young comedians John Mulaney and Nick Kroll playing old men. The show ended back in January, but Netflix recorded one of the shows and recently released it on their website. That’s how I saw it.

First, brilliant move by Netflix. Yes, you can’t replicate live theater, but only a very small number of people actually get to see Broadway shows. I appreciate the easy access to be able to see something like Oh, Hello in my living room.

Second, I’m sure there are plenty of great, funny plays that I’ve never heard of or seen, but those that I have seen didn’t really appeal to me. I can’t quite put a finger on why that is–maybe the writing and acting? Oh, Hello seems to know this, as it spends the first 20 minutes (and interludes throughout the show) poking fun at common tropes in plays. It’s in on the joke.

Third, while I think 95% of the show is scripted, both Mulaney and Kroll are excel at improv. Throughout the show they seem to embrace the idea that it’s fine–even great–if each Oh, Hello show is a little different than the others. They embrace mistakes and create little moments (like Kroll randomly holding Mulaney’s pinky finger during the introduction) that elevate the entire performance.

Fourth, my favorite part may be that in every Oh, Hello show, there’s a 5-10 minute segment where Mulaney and Kroll interview a famous guest in character. Steve Martin is that guest in the Netflix version. If anything, this seems like a brilliant marketing move for people who were able to see the show live more than once.

Overall, I found Oh, Hello to be laugh-out-loud hilarious. I hope you get the chance to watch it on Netflix. If you do, let me know what you think!

3 Responses to “Have You Seen Oh, Hello?”