I’m back to continue my occasional series about rooms I’d love to have in my house if I can ever afford to design such a place. So far I’ve discussed a ball room, cat tower room, game room(s), shower room, and fictional room. 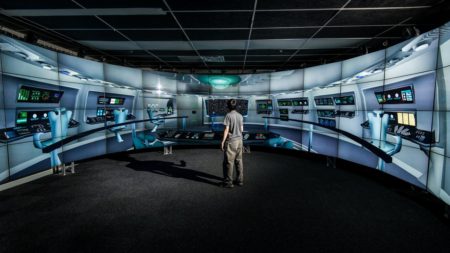 One of my lifelong technological dreams has been for virtual reality to progress to the point that it’s indistinguishable from reality, providing a platform for people to enter other worlds from unique perspectives (fly around on a dragon, use the Force, etc).

Now that we’re getting closer to that future, I’m not as sure that it’s what I want. I’ve played a few games of Beat Saber recently, and it’s clearly delineated from reality. Rather than try to emulate real life, it does a few specific things: It makes you feel like you’re cutting blocks with a lightsaber, and the movement pattern forces you into dancing (even if you’re a terrible and reluctant dancer like me).

Beat Saber is a lot of fun. Would it be as fun if it tried to confuse my brain into thinking it’s real? Probably not.

But does that stop me from wanting a game that feels like I’m flying around like a bird in the sky? Nope. I absolutely want that. I would also love playing VR games that don’t require any any controllers–if I lean over to pick up a rock, I want to make those motions with my body (or have the VR trick my brain into thinking my body is doing that), not press some combination of buttons on a joystick.

Also, as I’ve seen from Beat Saber, it would be awesome to have a variety of ways to get an exciting workout in other worlds. I want to be able to physically run around and burn calories as I explore Hyrule.

That’s why I want a VR room. Perhaps an entire room isn’t necessary, but I think it would be cool to have a room specifically and solely designed for current and future VR experiences.

This entry was posted on Tuesday, June 25th, 2019 at 7:57 pm and is filed under technology and tagged with dream rooms, technology. You can follow any responses to this entry through the RSS 2.0 feed.