A few years ago I was at a family reunion, and my aunt and uncle gave me a tour of their remodeled home. It was in their master bedroom that I discovered something that I’ve envied every since: A giant shower with spouts on opposite sides. It looked kind of like this: 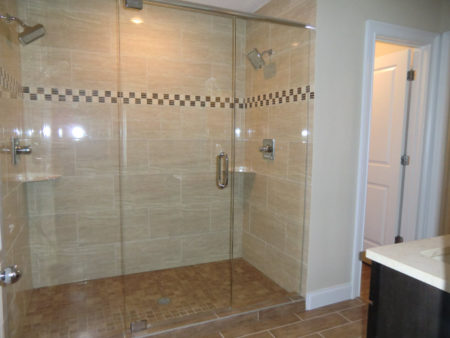 At the time, I assumed that I’d be married someday, and I loved the idea of using a shower like this with my wife. It just seems like a space to share with someone you love, especially given how it caters to the temperature preferences of her and me.

While marriage probably isn’t something I’m going to pursue anymore, I still really like the idea of having a shower the size of a small room. Granted, there’s a fair amount of empty space when one person is using a giant shower, but I’d rather have more space than the 3×3 plastic cage I currently have. Plus, just because I’m not married doesn’t mean I won’t have the occasional shower visitor from time to time… (for clarity, I’m referring to a consenting woman, not some creature that climbs out of the drain. Just to make it clear.)

Perhaps this is one of those things that seems better in principle than in reality. What do you think?

Also, do fancy showers sometimes have presets for specific temperatures and water strength? It would be nice to find that sweet spot once and then have the shower automatically find it from then on.

This entry was posted on Thursday, February 1st, 2018 at 9:31 pm and is filed under Uncategorized and tagged with dream rooms. You can follow any responses to this entry through the RSS 2.0 feed.